Various methods have been adopted to reduce orthodontic treatment time. These include biological approaches using vitamin D and prostaglandins; relaxin cytokines that include lymphocytes and monocytes-derived factors, receptor activator of nuclear factor kappa B ligand (RANKL), etc.; surgical methods such as corticotomy, piezocision, interseptal alveolar surgery, osteotomy, etc.; and noninvasive device-assisted methods such as mechanical vibration, photobiomodulation, etc. The biological and surgical approaches although more predictable have their own limitations of acceptance by patients. The present study, therefore, is a narrative review literature on the noninvasive methods to accelerate orthodontic tooth movement. A review of 56 articles related to the studies, using noninvasive methods, was done from 1987 to 2019. Photobiomodulation is one of the most studied noninvasive methods and has shown success in reducing the treatment time. More research is needed to make these methods more accessible and patient friendly.

In the present world, time is one asset that is valued by every judicious individual and the same has been recognized in the field of research in orthodontics. Orthodontic treatment is one of the most time-consuming therapies of dentistry,1,2 which leads to some adversities such as patient noncompliance and burnout,3 external root resorption,4,5 and demineralization of enamel leading to increased risk of caries.6,7 Numerous studies have been, therefore, done in this field to reduce the treatment time and the associated complications.8 This has led to the evolution of many methods to accelerate orthodontic tooth movement, which can be categorized as biological methods, biomechanical methods, and surgical methods (Flowchart 1 and Table 1).9–18

Many studies have reviewed the available methods to accelerate orthodontic tooth movement, but more focus has always been on the invasive methods, which include the biological and surgical methods. However, the noninvasive methods have the following advantages:

This study, therefore, aims to review the literature on noninvasive methods that are available for accelerated orthodontic tooth movement and understand their effectiveness in doing the same because these noninvasive methods are more readily accepted by the patients and hence more useful in routine practice.

Noninvasive methods for accelerated orthodontic tooth movement that have been studied in this paper include:

The idea of using pulsatile forces to stimulate inflammatory reaction in bone has been studied for quite a long time in the field of both orthopedics and orthodontics. Studies conducted by Shapiro et al.19 and Kurz et al.20 were some of the early contributors of this idea. The theories justifying the underlying working mechanism of vibratory stimulation include biological theories of increased inflammatory reaction, piezoelectric phenomenon in alveolar bone, etc. and also the biomechanical theory of reduced inelastic friction in the archwire and bracket interface.17 Alike every crystalline structure, bone also displays piezoelectric character when subjected to mechanical strain by forming electropositive (concave areas) and electronegative (convex areas) zones, which lead to the formation of bioelectric potential. This bioelectric potential is further increased by vibrations applied to the periodontal apparatus and thereby accelerate orthodontic tooth movement. Bowman,17 in his study, had put forward the idea that mechanical vibrations tend to reduce the inelastic friction (notching) that occurs in the bracket archwire interphase and hence reduce the treatment time. He also elucidates this reduced treatment time due to the increased inflammatory response and reduction in the “lag” phase of orthodontic tooth movement.

Various studies on animals have suggested an increased inflammatory response by increasing the mediators such as cytokines, colony-stimulating factor, interleukins, growth factors, tumor necrosis factor, etc.11,12,15,21 The studies on humans have been done by devise-assisted methods that have shown reduction in treatment time. Bowman17 and Orton-Gibbs et al.16 in their studies have used devise-assisted vibratory methods and found the time needed for alignment and leveling and reaching a bigger dimension archwire like 19 × 25 stainless steel or NiTi reduced by 30%. It was also found that when used in conjunction with invisalign, patients reported of early change in the aligners. Kalajzic et al.,18 however, did not find any significant reduction in treatment time in their study. 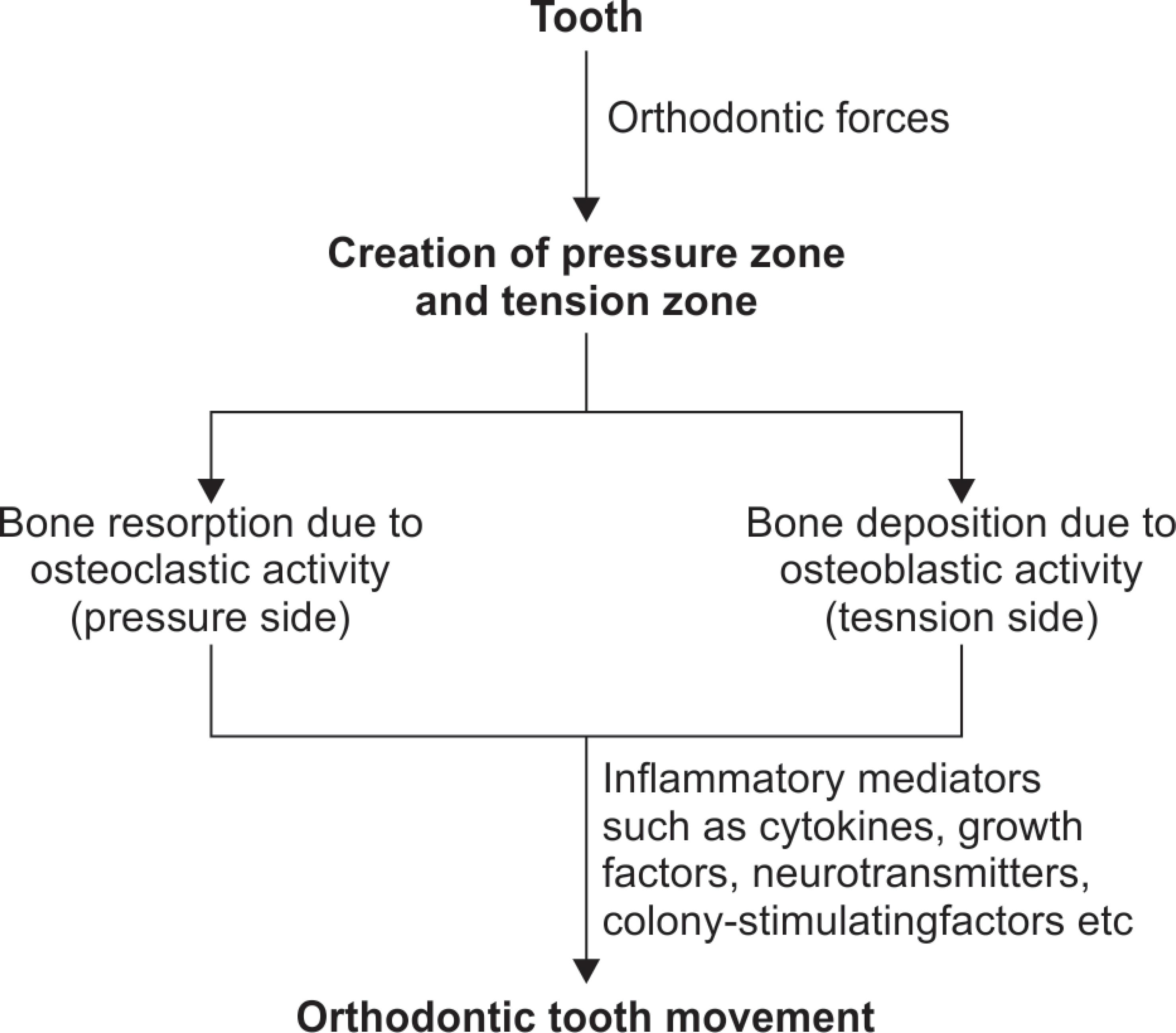 The PEMF has been used in orthopedics for the healing of fracture of long bones. The PEMF affects the activity of cyclic adenosine monophosphate (cAMP) and cyclic guanosine monophosphate (cGMP) by altering the cell membrane permeability.22Table 2 enlists various studies that used this method. Darendeliler et al.23 in their study on guinea pigs observed increased rate of orthodontic tooth movement in the presence of electromagnetic field, i.e., either static or pulsed.24 Showkatbakhsh et al.22 conducted a split mouth study on 10 orthodontic patients needing canine retraction by using PEMF on one side via a circuit and watch battery. The canine retraction on the PEMF exposed side occurred faster than the contralateral side, and the difference was statistically significant. More clinical studies using PEMF needs to be done as it displays some promising result in the few studies done so far.

Photobiomodulation or Light-accelerated Orthodontics via LLLT and LED

Photobiomodulation as the term implies is a process of modulation of biological tissues using light energy. Phototherapy or low-level laser therapy has been used for a variety of medical conditions, ranging from healing of ulcers, fracture, unresponsive skin cancer to reduction of pain in various circumstances. In the field of orthodontics, it has shown promising results in accelerating tooth movement, reducing pain, and relapse. Numerous studies have been done to test the effectiveness of LLLT or LED in these claims. Table 4 enlists various studies using this method. While laser is more coherent and has deeper penetration, LED is less coherent and more effective for surface treatment.

Various clinical trials and animal studies have been done, which have mostly concluded a positive result in light-accelerated orthodontics;21,27,28 however, a few studies did not find a positive result.29,30–34 The use of different laser types of different wavelength, energy density, and power has resulted in this varying response. It has been studied that wavelength of 800–850 nm with lower power output of 20–100 mW has shown better results in increasing tooth movement. In another study done by Ojima et al.,35 LED was used in continuous mode at 850 nm wavelength of infrared light, in conjunction with invisalign. It was found that the time in between the change of aligners significantly reduced.

Nonsurgical methods of accelerating orthodontic tooth movement have been discussed in this narrative review literature. Because of the heterogeneity of the data, meta-analysis has not been done. However, it can be concluded that various studies done previously to test the effectiveness of these methods have definitely shown the pathway of decreasing orthodontic treatment time. Mechanical vibrations, pulsed electromagnetic field, direct electric stimulation, and photobiomodulation have all been effective methods. However, mechanical vibration and photobiomodulation have been the methods of commercial interest and hence more marketed as devices to be readily used by practitioners. Further clinical trials are needed to achieve even better results and more cost-effective and easily available devices and methods for decreasing the orthodontic treatment time and hence the complications associated with it.