Aim and objective: Oral health education, including tooth brushing, during childhood, is important since this affects individuals’ behaviors as adults. The purpose of this investigation was to assess the self-reported oral health behaviors of dental and non-dental/medical university students in Ankara, Turkey, by utilizing the Hiroshima University Dental Behavior Inventory (HU-DBI).

Materials and methods: The study population consisted of 326 students from the faculty of dentistry and 331 students from non-dental faculties. All students were at various stages of education and were surveyed using the HU-DBI. The concise prediction about oral health behavior was studied from the replies to the twelve statements. To compare the total HU-DBI score between groups, an independent sample t-test was conducted.

Results: Significant differences were detected among the student groups. The mean HU-DBI point of dental school students was significantly higher than non-dental students. Less dental students stated gingival bleeding, sticky deposits, being uncomfortable with the color of gums, and postponing going to a dentist if they do not have a toothache.

Conclusion: The results we obtained marked that dental students have better dental attitudes than non-dental/medical students. This may be explained by dental students’ receiving dental curriculum and clinical training.

Health and diseases of the oral cavity include the interaction of complicated proceedings, including various elements. In dentistry, it is obligatory to understand these elements and advance interventions to evolve the oral health of nations.1

The most efficient way to ensure oral health is to prevent oral diseases. Oral health is acknowledged to be as important as general health. The attitudes of suppliers of oral health maintenance and their oral self-care behaviors project their perception of the significance of preclusive dental operations and assists in advancing the oral health of the sufferers whom they provide treatment.2–5 Therefore, they can be a positive control group for the studies evaluating oral health attitudes of undergraduates of other domains except medical. In addition to this, it was stated in the literature that oral self-care applications of dental students get better as their years in dental school extend.6–9 Since different countries have differences in healthcare systems and speak dissimilar languages, being able to compare the oral health behaviors and attitudes of oral healthcare suppliers from different countries may be time-consuming and/or complicated. Consequently, to study dental health behavior, apprehension, and attitudes of the individuals, Hiroshima University Dental Behavior Inventory (HU-DBI) was developed by Dr Makoto Kawamura in 1988.10 The inventory was in Japanese originally. It is composed of 20 statements principally regarding oral health attitudes and tooth-brushing habit. All questions have a dichotomous response format (agree/disagree). A numerical prediction of entire oral health attitude and behavior is ensured by the sum number of suitable agree/disagree responses. The possible highest score that can be received is 12, and better oral health behavior is indicated by higher scores.11 The HU-DBI has been interpreted into many languages and as a result comparisons between different countries and cultures could be performed.12 The English version of the HU-DBI has a good currency and test–retest credibility.13

There were two stages of linguistic equivalence: (1) translation and back translation of the inventory and (2) equivalence testing between the Turkish and English versions of the survey form. First, bilingual dental professionals translated the English form of the questionnaire into Turkish. At the same time, a bilingual psychologist translated the survey separately to give the same impression for the items. These were then compared and discussed with two bilingual Turkish professionals proficient in epidemiological researches and questionnaires. After reaching a satisfactory agreement in regard to the translated format, the Turkish inventory was back-translated. Afterward, the items in Turkish were translated into English by a bilingual English teacher, who had not seen the original version. Next, a comparison between the translated Turkish, and the original English inventory was made by the investigator. Minor alterations in the definitions of some statements were performed with the help of the back translator. A Turkish language specialist controlled the grammar and the sentence structures and made the necessary minor corrections in the Turkish version.

At the second stage, in a convenience sample of eight bilingual dental research assistants, the linguistic equivalence of the original English HU-DBI to the Turkish version was validated. Cohen’s kappa test was used to test item agreements between the two versions in English and Turkish.18 The range of kappa coefficients of the 20 items between 0.64 and 0.92.

The study population consisted of 326 students from Ankara University Faculty of Dentistry and 331 students from non-dental faculties of Gazi University, Ankara (Table 1). All students were at various stages of education and were surveyed by using the HU-DBI. The dental students completed the questionnaire in their classrooms altogether, whereas, for the non-dental group, the participants were surveyed when they applied for a dental examination. Every 10th student who applied for a dental examination was surveyed during the same day. All students participated voluntarily and signed the informed consent, although survey procedures had an exemption from institutional review boards in the year that the data were collected; the research was performed in accordance with the Declaration of Helsinki. The survey was completed anonymously, and age, gender, name of the school, place of birth, and economic status of the parents were collected.

The differentiation in the distribution of all variables by the group was evaluated using the Chi-square test. First, to compare the answers of preclinical and clinical students, univariate analyses were conducted. Next, to construct multivariate logistic regression models with group status as a dependent variable, a step-wise backward selection strategy was utilized. The Wald statistic was used to test the null hypothesis if the regression coefficients were zero. The sum of oral health behavior prediction was calculated using the replies of the predetermined items.19 To compare the total HU-DBI scores between groups; an independent sample t-test was performed. Materials were analyzed using the SPSS 10.0 (SPSS. Inc. Chicago, IL, USA) package, and the statistical significance was considered p < 0.05.

The mean age was 21.24 ± 2.07 for dental school students and 22.30 ± 2.5 for non-dental students (Table 1). Table 2 shows the rate of “agree” responses in the HU-DBI. The data are grouped by sub-groups of the dental students. Significant differences were discovered between the student groups. The mean HU-DBI scores, number of teeth with fillings and extracted teeth; and percent of satisfaction with appearance for the groups are shown in Table 2.

About 43% of the dental students said they had postponed visiting a dentist till they suffered from toothache (Item 15) and 73.3% reported that they believe it was not possible to prevent periodontal diseases by only tooth brushing (Item 14). Sixty-nine percent of all dental students did not have worries about visiting the dentist and 67% stated brushing each tooth meticulously (Item 1). More preclinical students than clinical students had never been taught how to brush by a dental professional (Item 10, p < 0.001) and they were using toothbrush with hard bristles (Item 17, p < 0.001). Most of non-dental students reported brushing each tooth meticulously (Item 9); often checking their teeth in a mirror after brushing (Item 12), and that they had worries about their teeth color (Item 3) (Table 2). There were significant differences (p < 0.001) by year of dental education for using child-size toothbrush (Item 5), cleaning of the teeth without toothpaste (Item 11), and brushing very well told by their dentist (Item 20). There were not any significant differences between dental and non-dental students for worrying much about visiting the dentist (Item 1), using a child-size toothbrush (Item 5), cleaning teeth without toothpaste (Item 11), preventing periodontal diseases with solely tooth brushing (Item 14), and spending too much time for brushing (Item 18) (Table 2).

Most of the students among the total study population thought they would have dentures when they age and believed it was impossible to avoid periodontal diseases by merely tooth brushing. A greater number of preclinical students thought that they will not be able to refrain from having dentures in old age (Item 6, p < 0.0001), and despite daily tooth brushing, their teeth were getting worse (Item 8, p < 0.0001) in comparison to clinical dental students. Additionally, a higher proportion of preclinical students stated that it was not possible to stay away from periodontal diseases by merely tooth brushing (Item 14. p < 0.0001) and felt that they brushed well when they brushed hard (Item 18, p < 0.0001).

Regarding the self-reported dental status, there were no significant differences between dental and non-dental students (Table 2). The average tooth loss was two teeth for all the groups. However, the number of teeth with fillings was slightly higher for the clinical students.

a Difference between preclinic and clinic students

b Difference between dental and non-dental students

Oral health providers are expected to establish correct oral habits as a part of their profession in providing oral healthcare. Dental students are expected to have superior consciousness of oral self-care since this plays an important role in allowing them to define their patients’ oral health and to create oral awareness. The development of individual oral health among dental students is connected to their improvement throughout their dental education.7,20,21 The present study has shown that, just as many other studies conducted with the HU-DBI, oral self-care attitudes improve with dental education.9,15,19–26

This study was the first evaluation of self-reported oral health attitudes and behaviors of dental and non-dental/medical students using the original HU-DBI. Therefore, it has prime importance. There are two studies to our knowledge that compared the data of dental students to that of students from other faculties. Both studies’ results complied with ours. In Lithuania, 183 dental and 75 technology students were evaluated. They stated that oral health behaviors and knowledge of dental students were more advanced.27 Second, a study in Columbia compared dental students to civil engineering students where it was observed that dental education brings out significantly better outcomes.28 They used the Spanish version of the HU-DBI whereas, in our study, the English version was conducted. The interpretation of the HU-DBI from English to Turkish was required as a result of Turkish being the predominant language of teaching in most of the universities in our country, particularly the two universities that this study was performed. The outcomes revealed that the Turkish version of the HU-DBI was linguistically equivalent to the questionnaire in English.

a The reference category is: non-dental

b This parameter is set to zero because it is redundant

Table 2 shows that better percentages of expected answers were received from clinical dental students compared to preclinical students. These differences in attitudes indicate that dental students’ behaviors improve with increasing levels of education. This was in compliance with other studies.12,15,25,29,32,33 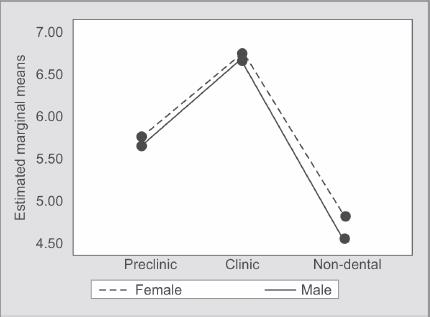 Fig. 1: Estimated marginal means of HU-DBI score according to gender and groups (no significant difference between the genders in the subgroups)

Only 40.5% of dental students and 48.9% of non-dental/medical students stated that they had not been taught how to brush their teeth by a dentist (Item 10, p = 0.027). These proportions were close to that of students from other studies conducted in Turkey;2,21,34 however, higher than Indian,20 Chinese and British,12 Greek and Japan,17 Jordanian,30 Lithuanian,27 and Iranian32 dental students. Almost half of the population stating not having received any professional oral hygiene instruction may indicate the deficits in the dental health system or organization in Turkey since regular visits to a dentist and/or communal educational programs do not exist.

The fact that dental school students have better oral care habits (i.e., having less gum bleeding, noticing less plaque on their teeth, brushing each tooth carefully, visiting the dentist without a toothache, avoiding strong strokes when brushing, being less annoyed with the color of their gingiva) than non-dental/medical students may be explained by dental students’ receiving dental curriculum and clinical training. Nevertheless, the outcomes of this study emphasize the comparatively poor oral health behaviors and attitudes of Turkish university students.

The insufficient oral health attitudes of Turkish university students should be enhanced with the help of generic national programs aiming at teaching oral healthcare and support individuals’ oral hygiene practices as well as generalizing preventive oral health information; these programs must be applied beginning from early childhood.

The author would like to thank Prof Dr Cem Gurgan for all his contributions to the study. The author has declared that no financial support was received from any organization.