Aim and objective: This ex vivo study evaluated the efficiency of an Er:YAG laser (2940 nm) at different pulse energy levels to remove the smear layer with or without chelators from the middle and apical third of mesial roots.

Materials and methods: Thirty-four mesial root canals of first mandibular molars (type II Vertucci) were divided into four groups of eight teeth each. Each group consisted of two subgroups each (A and B), regarding the irrigation protocol. In subgroup A, teeth were rinsed only by distilled water whereas, in subgroup B, teeth were rinsed by 5 mL 17% EDTA for 60 seconds, 5 mL 5% NaOCL, and 5 mL distilled water. The rest two teeth were used as control groups. After coronal access, all teeth were instrumented up to size F3 (30/0.09) and, then, the experimental groups were irradiated by an Er:YAG laser (2940 nm). Four different pulse energy values were tested, namely 30, 50, 70, and 80 mJ to irradiate the roots in group I, group II, group III, and group IV, respectively. The control group (n = 2) was instrumented and rinsed as experimental groups (subgroup B) but not irradiated. Teeth were observed under SEM. Results were statistically analyzed with the Kruskal–Wallis test.

Conclusion: The presence of a chelating factor may play an important role in the laser mechanism of smear layer removal from the apical part of narrow and curved root canals.

The absorption of laser light is strongly dependent on the laser wavelength and kind of tissue. Mid-infrared wavelengths between 2.7 and 3 μm exhibit a high absorption in water and hydroxyapatite, thus making them highly effective in ablating hard dental tissues.1,2 Currently, the most common lasers of the mid-infrared spectrum used in dentistry, are the Er:YAG laser (2940 nm) and the Er,Cr:YSGG laser (2790 nm).3

Specifically, Er:YAG laser has the highest absorption in water with an absorption coefficient μΑ of 800 cm−1. Considering that hard dental tissues consist of water in different percentages,4 Er:YAG laser can ablate them.5,6 Therefore, Er:YAG laser is an effective tool for smear layer removal in root canals.7–10

Understanding the morphology of the root canal is of primary importance in achieving the long-term success of the treatment.13 Anatomically permanent mandibular first molar typically displays a mesial and a distal root with two mesial and one distal canal.14–16 The most common canal configuration in mesial roots of first is type IV and type II (31.5–28%).17

The study had a purpose to evaluate smear layer removal in the middle and apical third of mesial root canals irradiated by an Er:YAG laser and determining the optimal values of pulse energy and average power. Therefore, Er:YAG laser, using a conical designed fiber tip can effectively remove the smear layer in the apical root third, without the aid of any chemical irrigants.

Research Ethics Committee of Dental School of the Aristotle University of Thessaloniki approved the protocol (no 363/16.01.18). A total number of 34 freshly extracted mandibular first molars with two roots were used. The mesial root was separated from the distal and was placed in a holder. Cone-beam computed tomography (CBCT) was used for scanning and separation of roots according to the configuration anatomy. Mesial roots, joining to common apical foramen (type II Vertucci classification), were collected.

Root canals were instrumented using Protaper Gold (Dentsply-Maillefer, Ballaigues, Switzerland) up to size F3 (30/0.09) and irrigated with 1 mL distilled water between instrumentations. At the end of the process, teeth were randomly assigned into four groups with two subgroups each namely A and B, depending on the protocol used to remove the smear layer. In subgroup A, teeth were rinsed only by 5% distilled water whereas, in subgroup B, teeth were rinsed by 5 mL 17% EDTA for 60 seconds, 5 mL 5% NaOCL, and 5 mL distilled water. Teeth were incubated at 37°C temperature and 100% humidity until use.

An Er:YAG laser system (2940 nm) (Morita AdvErl Evo, Kyoto, Japan) was used. The tip utilized was a 300 μm diameter radial tip (R300T), applied in a suitable handpiece (Morita, N8001736) (Fig. 1). The laser tip was inserted into the root canal 1 mm short of the apex. The movement was longitudinal circular movement from the apical to the coronal part of the root. The speed of the movement was 2 mm/s. Each root canal was irradiated four times.

The samples were irradiated according to the following protocol (Table 1): 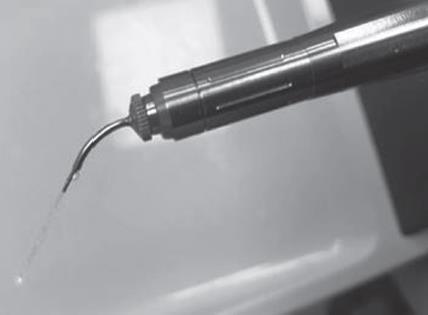 All sample irradiations were performed by a single operator. After irradiation, two longitudinal grooves were made on the outer root surface. Teeth were split along their long axis in a buccolingual direction. From the two halves, only the mesial half of the mesial root was selected and the distal part was discarded. Mesial parts were observed under the scanning electron microscope at 2,000× magnification. Digital images were taken from the common apical third of the buccal and lingual root canal.

The percentage of smear layer residues was estimated according to the rating system below:

Two calibrated examiners evaluated the number of residues. A third examiner assisted in the scoring of the sample in case of disagreement.

The Cohen’s κ coefficient was used to analyze the inter-rater agreement. Results were statistically analyzed with Kruskal–Wallis and Mann–Whitney test. Statistical analysis was performed with SPSS Statistics Software and the significance level was set at 5% (p < 0.05).

The Cohen κ analysis showed excellent reliability and reproducibility between the evaluators with values ≥1 for both. Different results were observed in experimental groups while comparing different laser parameters and irrigation protocols applied. The results in the middle and apical third of the mesial root canals in each group are shown in Tables 2 and 3, respectively.

More specifically, samples of groups IA, IIA, IIIA, and IVA, were irrigated only by distilled water. In the apical part of the root canal, SEM pictures showed the presence of a heavy and intact smear layer. There were no areas where the smear layer was slightly removed (Fig. 2A). In the middle part of these samples, magnification images showed much lower percentages of smear layer residues. In half of the samples, a small amount of smear layer with many dentinal tubules open was observed (Fig. 2B).

While examining the efficacy of smear layer removal from middle and apical thirds, Kruskal–Wallis test revealed that none of the laser groups (IA, IIA, IIIA, IVA) was more efficient than other groups. The results for the present study showed considerable amounts of smear layer on the canal walls in the apical third, regardless of the pulse energy applied.

On the other hand, in groups IB, IIB, IIIB, IVB, samples were irrigated following an irrigation protocol (5 mL 17% EDTA for 60 seconds, 5 mL 5% NaOCL, and 5 mL distilled water). SEM pictures revealed that there were samples where the smear layer was totally removed in apical third (Fig. 3A). In group IA (power pulse 0.75 W), SEM pictures showed the best presence of smear layer removal in most samples. All the samples were evaluated with a score of 0 and dentinal tubules completely open and debris-free. In groups IIB, IIIB, IVB, there were samples free of smear layer (score 0), some with a small amount of smear layer (score 1), and a small percentage with homogeneous smear layer covering the root canal walls (score 2). In the middle part, in all the samples of subgroup B, the smear layer was completely removed or it is left a small amount of debris (Fig. 3B).

In the control group, samples were free of debris and smear layer in middle and apical part (Fig. 4).

This study evaluated the cleanliness of dentinal walls in the middle and apical third of mesial root canals after Er:YAG laser irradiation. Laser parameters—average power and pulse energy—were compared concerning the efficiency in smear layer removal. It was supposed that there is no difference between groups irrigated with chelators and the other groups irrigated with distilled water before laser irradiation.

The smear layer is formed after the mechanical preparation of the root canal.18 There are several methods for removing the smear layer such as chemical solutions, use of ultrasonic dental devices, and dental lasers. Er:YAG laser has the optimum absorption in water which explains its increased efficiency.19 The dental tissue water content has an important role in the ablation process.20 Irradiation is absorbed by the water which is transformed into a vapor bubble. This bubble is the basis of cavitation and smear layer removal.21,22

Another study confirmed the successful removal of the smear layer using Er:YAG laser with lower power settings (20 mJ, 10 Hz, 50 μs) for 20 or 40 seconds with 17% EDTA irrigation.24 In both previous studies,23,24 the SEM analysis of the mentioned groups, showed open tubules, exposed intact collagen fibers, and no thermal damage to the root canal wall. The smear layer was successfully removed.

Figs 2A and B: Apical third (A) and middle third (B) after irrigation by distilled water 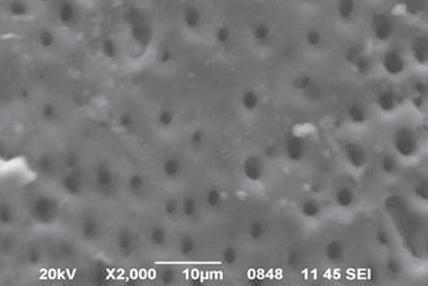 The sample of this study consisted of mesial roots of first mandibular molars. It is now well accepted that the mandibular first molar exhibits several anatomical variations not only in the number of roots but also in canal morphology.25,26 The new lanced endodontic tip R300T tip is used for the first time for smear layer removal from molars. Herrmann27 supported that after root canal preparation with mechanical nickel-titanium instrumentation, R300T (50 mJ, 25 pps) can be used. A recent in vitro study28 aimed at assessing the antimicrobial activity of Er:YAG laser (70 mJ, 20 pps) and R300T on several microorganisms relative to persistent endodontic infection.

Laser applications necessitate root preparation at least size 30. However, R300T of 300 μm necessitates a larger root canal diameter than ISO 30. In our studies, in subgroups A, it was very difficult the instrumentation of such narrow and curved root canals without a chelator. Many samples were rejected due to a broken file.

Ramalho et al.29 showed that the Er:YAG laser did not remove the smear layer from dentinal wall surfaces, because they were not reachable by its optical fiber. Better results have been reported when comparing Er:YAG with other methods of smear layer removal. Er:YAG is reported to have the most effective removal of smear layer from the dentine wall compared to 17% EDTA, 6% citric acid, 6% phosphoric acid, and CO2 laser.9 In another study, Er:YAG had also shown to have better smear layer removal when compared to other wavelengths such as Argon and Nd:YAG lasers.7

Irrigation with EDTA was used in this study. Chelating agents have been suggested for removing the smear layer, including EDTA, citric acid, and orthophosphoric acid.30 These irrigants dramatically improve the cleaning ability of root canals. On the other hand, the combination of NaOCL and EDTA removed the smear layer only partially31 and unable to clean in the apical portion of the root canals, and hence, to improve that in apical portion laser-activated systems were used in the recent study of Dhawan et al.32 Comparing the two major groups from a clinical point of view, it can be concluded that Er:YAG laser is more effective in combination with EDTA solution. Er:YAG laser adequately cleaned dentinal walls at the middle third. The absence of the chelating factor played an important role in the laser mechanism of smear layer removal in the apical third.

Pulse duration has been found to influence ablation.33–35 Shorter pulse durations lead to less thermal damage to surrounding tissue and results in more efficient ablation.36 Unfortunately, the device used has a constant pulse duration of 300 μs which leads to smaller peak power values.

Er:YAG laser due to its high water absorption and hydroxyapatite has low penetration into the root walls.37 Its antimicrobial action is limited in removing smear layer and superficially cleaning the dentinal walls better than conventional methods, but has significantly less transmission in dentine than a near-infrared diode laser.38

The outcome of the present study showed that laser-assisted smear layer removal with Er:YAG laser at four different energy pulses in combination with EDTA showed to a great degree, effectiveness in smear layer removal. The presence of the chelating factor played an important role in the mechanism of smear layer removal. Further research needs to be performed to find the optimal irradiation protocol (average power, pulse energy, pulse duration) for the laser systems, which could remove the smear layer completely.