The conventional view of orthodontic tooth movement is that of a cell-mediated process orchestrated predominantly within the PDL ligament. Sustained force on a tooth translates into a PDL cell population, resulting in the conversion of pleomorphic fibroblasts into osteoblasts, osteoclasts from monocytic precursors. This results in the osteoclasis of the lamina dura, massive cell death, and hyalinization within the PDL followed by frontal resorption and bone deposition, leading to the desired tooth movement.

Periodontal accelerated osteogenic orthodontics is a procedure combining selective alveolar corticotomy, particulate bone grafting, and the application of orthodontic forces. The procedure, theoretically based on the bone healing pattern known as the RAP, was developed by Thomas Wilcko (periodontist) and William Wilcko (orthodontist) in 1995.1 Following surgical wounding of cortical bone, RAP potentiates tissue reorganization and healing by way of a transient burst of localized hard and soft tissue remodeling. The RAP in humans begins within a few days of surgery, typically peaks at 1 to 2 months, and may take from 6 to more than 24 months to subside.

Kole2 first reported combining orthodontics with corticotomy surgery and completed the active tooth movement in adult orthodontic cases in 6 to 12 weeks. Frost,3 an orthopedist, in the year 1989 documented that surgical wounding of osseous hard tissue results in striking reorganizing activity adjacent to the site of injury in osseous and/or soft tissue surgery. Gantes et al4 carried out preliminary studies on corticotomy-assisted orthodontic tooth alignment. According to them, the mean treatment time was 14.8 months for the experimental group (corticotomy) and 28.3 months for the control group (without corticotomy). Suya5 reported desirable tooth movements by moving blocks of bone using the crowns of the teeth as handles.

A total of 12 cases were studied over 18 months. These included 4 males and 8 females in the age group of 15 to 25 years (21.33 ± 2.12 years). The cases were referred from the Department of Orthodontia to the Department of Periodontology, ADC (R&R), having bimaxillary protrusion with an increased overjet (Figs 1A to C). Informed consent of the subjects and clearance from Ethical Clearance Committee of the institution was taken. This was followed by a detailed medical and dental case history. The inclusion criteria were set at systemically and periodontally healthy individuals who were motivated for the treatment and postoperative maintenance. Exclusion criteria were defined as individuals who were smokers, had parafunctional habits, were on any medications, pregnant females, and those who gave any previous history of PDL surgery. 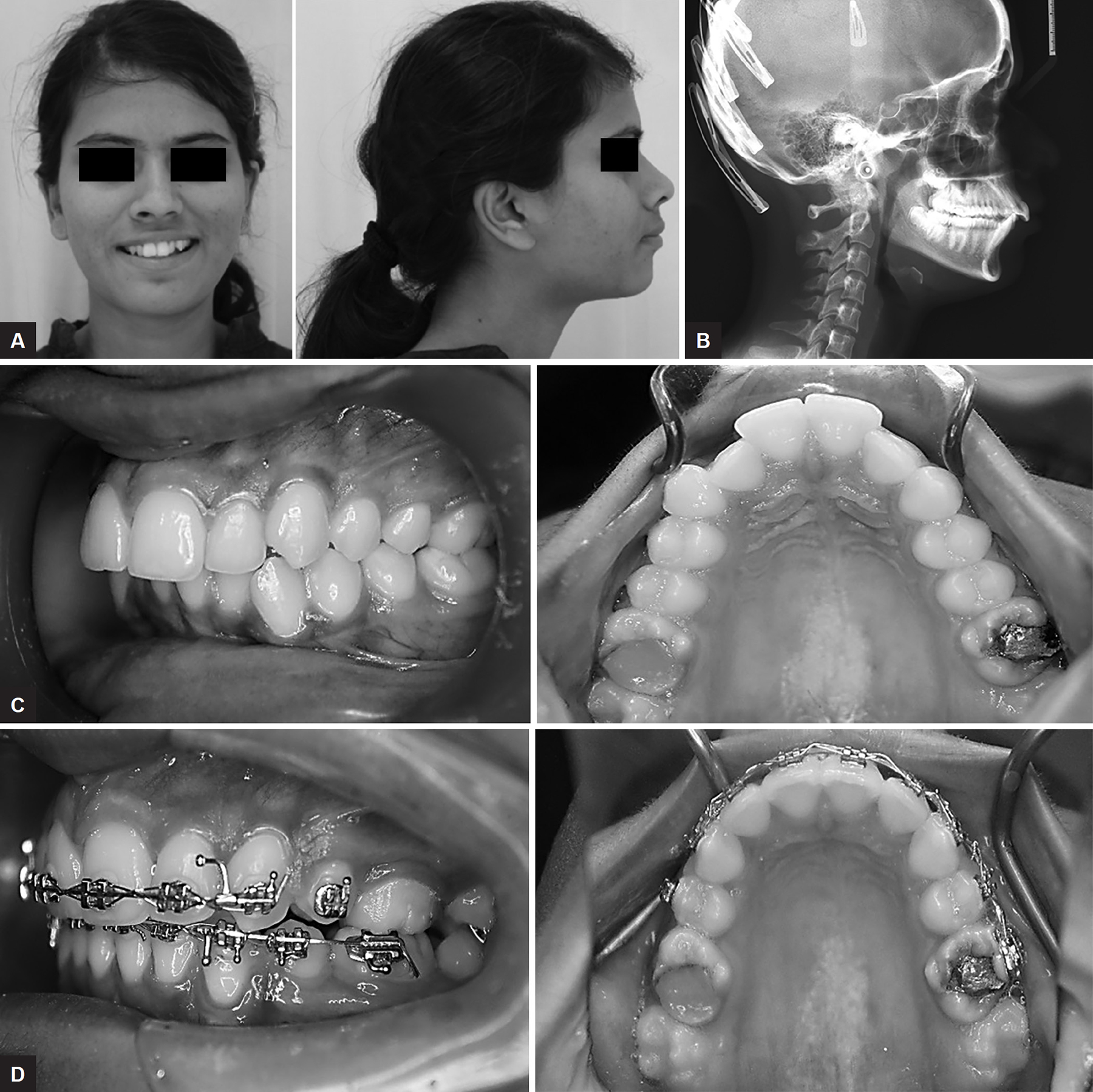 In group I cases, initial orthodontic teeth alignment and leveling of U/L anterior teeth was carried out using a 014" and 016" NiTi wire (for 1 month) (Fig. 1D). After 4 weeks of alignment, the cases were referred to the Department of Periodontology. Surgical corticotomy procedure was planned only involving the labial cortical plates in the upper and lower anterior region. Routine blood hemogram, urine examination, and blood sugar estimation were done prior to the surgical procedure. Extra- and intraoral antisepsis was carried out, and the surgical site was anesthetized using 2% lignocaine solution with adrenaline. A full-thickness mucoperiosteal flap was reflected from maxillary canine to canine beyond the root apices. Monocortical vertical corticotomy cuts were given in the alveolar bone with piezo blades 2 mm apical to the crestal bone in the inter-radicular space mid-way between the root prominences, and extended 1 to 2 mm apically beyond the apex of the roots (Fig. 2A). The vertical cuts were joined by similar horizontal piezo cuts apically. Solitary perforations were made in the alveolar bone over the radicular surface, aimed at release of growth factors and mediators of inflammation, and graft incorporation. The DFDBA was placed in the surgical area and the flaps were sutured (Fig. 2B). A periodontal pack was placed to secure the surgical site and aid the patient comfort. Similar procedure was carried out in the mandibular arch from canine to canine region (Figs 2C and D). Postoperative antibiotics and analgesics were prescribed, and instructions were imparted to the patients. Suture removal was done 1 week after the surgical procedure. All the cases reported uneventful healing.

Statistical analysis was performed using the Wilcoxon test for a paired group comparison (Table 1). The treated area was the unit of analysis. Pre- and postoperative measurements of each parameter were averaged [mean ± standard deviation (SD)], and all tests were performed at the 5% significance level; p-values < 0.05 were regarded as statistically significant.

Pre- and posttreatment periodontal parameters were recorded, statistically analyzed, and corroborated with similar orthodontic treatment procedures without the use of the corticotomy technique (Table 2).

An effective and desirable treatment result was obtained in all the subjects using the PAOO technique, within an average time span of 6 to 8 months (Fig. 3).

A comparative clinical and radiographical preoperative and the postoperative assessment is presented in Fig. 4.

Using this procedure the treatment objectives in group I cases were met in just half to one-third of the treatment time required by conventional orthodontics in group II cases (net treatment time: Group I 208.50 ± 20.125 days and group II 546 ± 11.246 days) (Table 1). These results were statistically significant (p-value < 0.05).

Statistical analysis of regaining of arch length was nonsignificant (p-value > 0.05) (Table 1). Furthermore, nonsignificant results were arrived at comparing the periodontal parameters (PD, CAL, and AG) between the test and the control groups (Table 2).

Periodontally accelerated osteogenic orthodontics can play an important role in the comprehensive treatment of patients' occlusal and esthetic needs, as this procedure has shown optimal results regarding increased alveolar bone thickness, decreased treatment time, reduced patient discomfort of long-term use of brackets, and also increased long-term stability of the orthodontic treatment with healthy periodontium. It can be observed from the study that surgical corticotomy reduces the treatment time by almost one-third when compared with the conventional orthodontic procedure. These results are in accordance with the results of the study done by Wilcko et al6 in which the corticotomy procedure has reduced the treatment time and the teeth moved three to four times faster than the conventional orthodontics. According to Wilcko et al,6 it is the placement of the bone graft which is an additional step that is believed to be responsible for the increased posttreatment stability and increased alveolar bone width as well as maintainable periodontium. It has been documented that trauma to cortical bone potentiates localized osteoporosis, increased mobilization of calcium, decreased bone density, and increased bone turnover that potentiates rapid tooth movement.7 According to Suya,5 the protein extracts from the decalcified bone matrix are responsible for the new bone formation.

Periodontally accelerated osteogenic orthodontics facilitates the orthodontist to get the treatment done with decreased treatment time, i.e., in traditional orthodontic treatment it takes about 1.5 to 2 years, whereas by doing PAOO, movement of tooth is obtained within 6 to 8 months. It enhances the esthetics and posttreatment orthodontic stability. It increases the access of the patient toward orthodontic therapy. Other applicable advantages of the PAOO technique include nonextraction management of moderately severe crowding by increasing the alveolar volume without causing labial tipping, reduced relapse rate, and physiological tooth movement without bone necrosis. Except for severe class III skeletal dysplasia, PAOO can replace some orthognathic surgery, and because of the low morbidity, patients 11 to 78 years old have been treated with marked success. The major disadvantage of the procedure is postoperative patient morbidity. The success of this treatment depends on the coordination of the orthodontist, periodontist, and oral and maxillofacial surgeon. 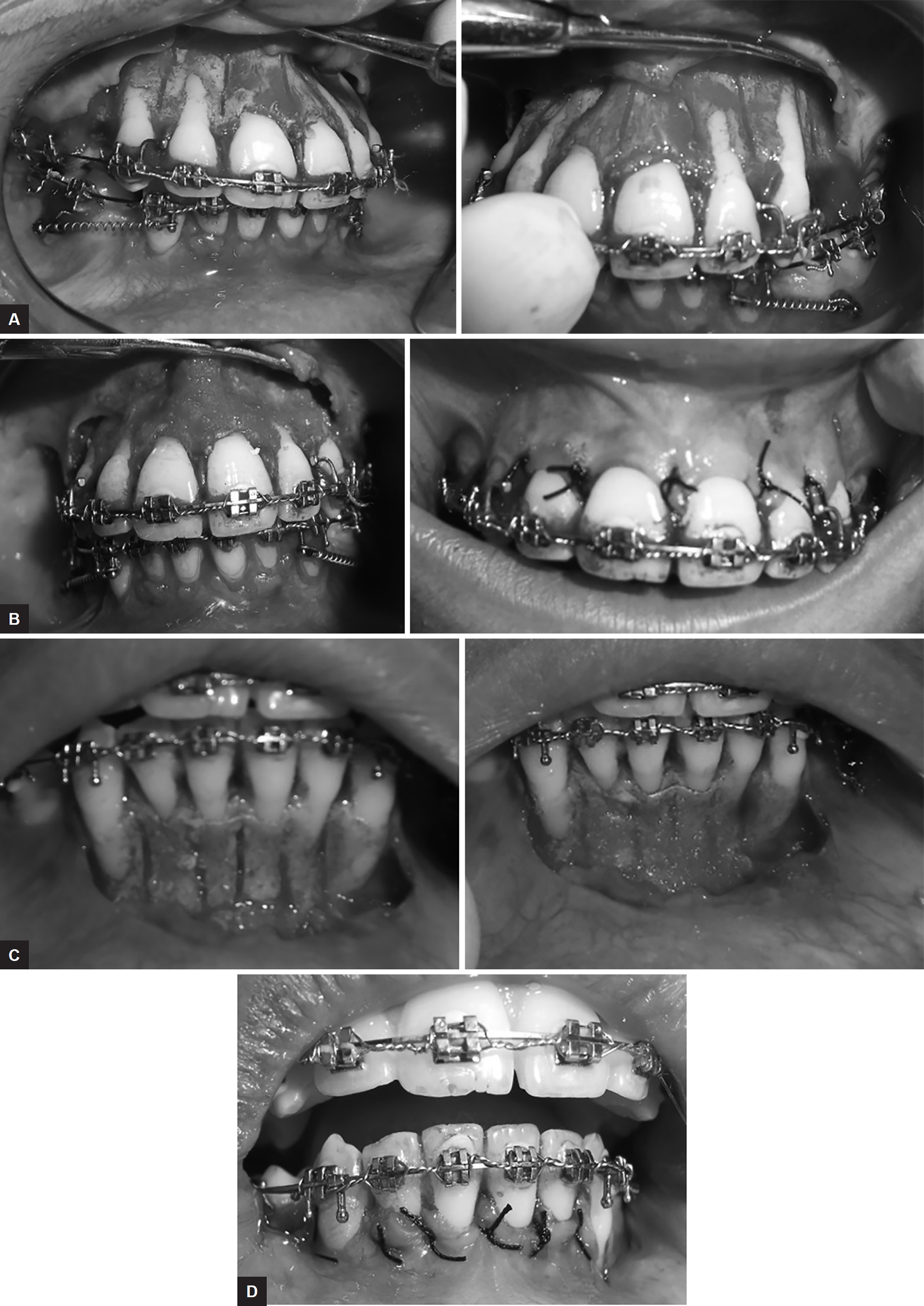 Postoperative 6 months: (A) Front and side lateral profile; and (B) lateral cephalogram

Pre- and postoperative comparison: (A) Frontal profile; (B) side lateral profile; and (C) lateral cephalogram 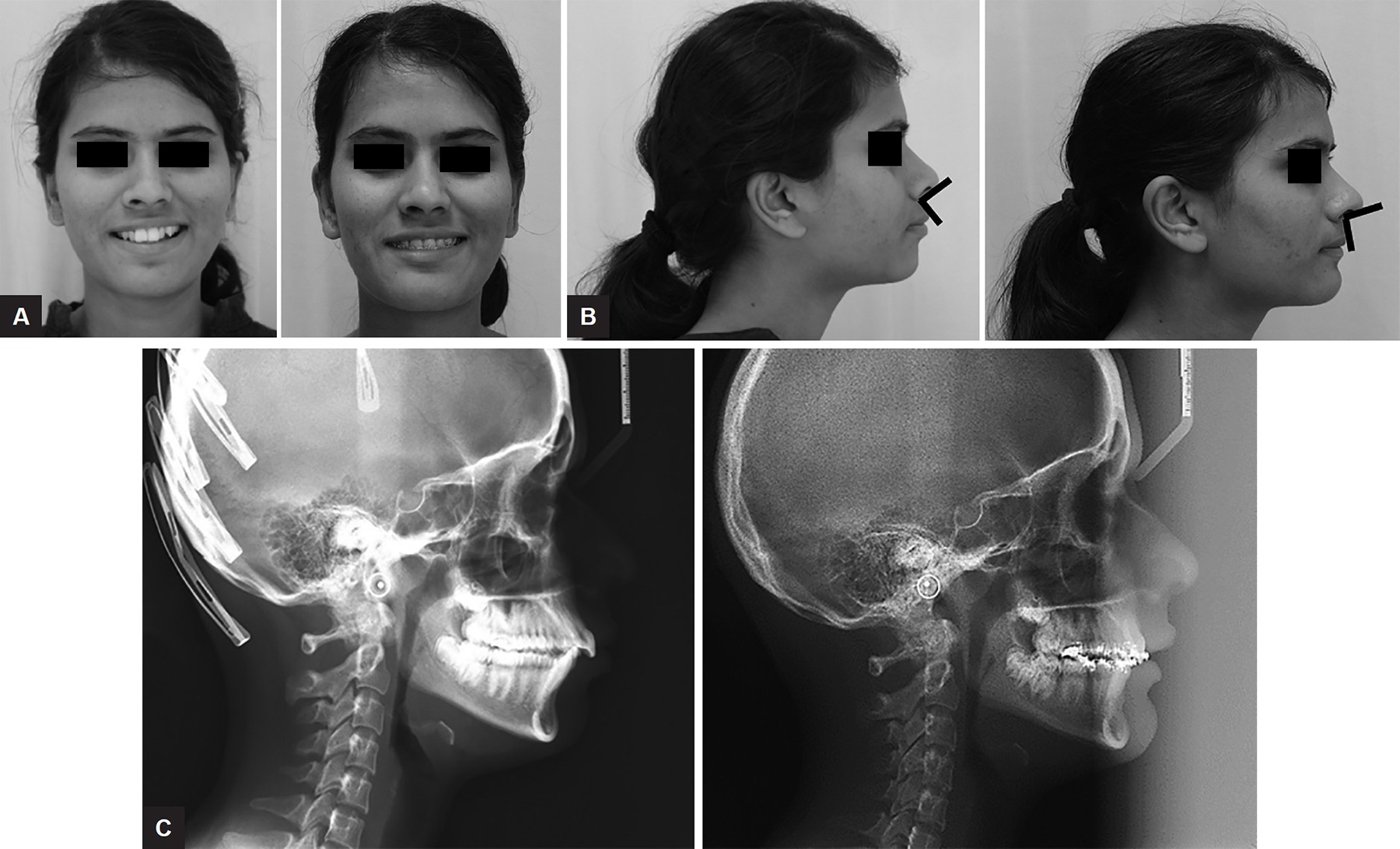