Periodontitis is an inflammatory disease caused by imbalance between the levels of bacterial pathogens and the host immune response to infection. Investigations have demonstrated that disruption in equilibrium between free-oxygen radicals and antioxidants [due to production of more reactive oxygen species (ROS) against microorganisms and consequent oxidative stress] plays a pivotal role in the progression of periodontal inflammation.1,2 On the contrary, smoking is a significant source of oxidative stress by increases in ROS production.3-5 The exact mechanism by which smoking exerts effects on the periodontium is unclear.3 It has been shown that smoking increases the levels of free radicals and lipid peroxidation in periodontal tissues and subsequently decreased antioxidant levels in blood, saliva, and gingival crevicular fluid (GCF) in patients with periodontitis and gingivitis who smoke.6

Antioxidants could scavenge the free radicals and maintain the balance between oxidants and antioxidants. Therefore, antioxidant therapy as an adjunctive treatment by reducing the oxidative stress in periodontal tissues has been advocated enhancing the effects of periodontal therapy.7

Furthermore, an epidemiological study by Kushiyama et al11 concluded that there was a modest inverse association between the intake of green tea and periodontal disease. However, it is still unclear how consumption of green tea affects salivary oxidative stress in smokers.2

In a previous study, we indicated that green tea improves the salivary antioxidant status in both cigarette smokers (CS) and nonsmokers (NS), and we found a significant difference in salivary TAC alteration in CS compared with NS over the study period.12 Against this background, we hypothesize that daily consumption of green tea might have different effects on the periodontal status of different groups (categorized based on their smoking or nonsmoking status) and might contribute to decreased gingival oxidative stress. Therefore, the main objectives of this study were to compare the periodontal status of different groups of smokers and nonsmokers, determine the relation between TAC and periodontal status, and investigate the alteration in TAC after green tea consumption.

The study was conducted according to the principles of the “Declaration of Helsinki” and approved by the Ethics Committee of the Shahid Beheshti University of Medical Sciences. All participants signed an informed consent document prior to the study.

The CPITN was used to provide a detailed assessment of gum health in all participants. A graduated periodontal probe inserted between teeth and gums at a standard force (approximately 20—25 gm) was used to measure pocket depth by one trained dentist, as well as assessment of calculus accumulation on the subgingival surfaces of the teeth. These evaluations were made for each sextant of the dentition. If second molars were missing, the third molars were included. The scoring index for this procedure ranged from 0 to 4 [no disease, bleeding on probing (BOP), calculus without pocketing, shallow or deep periodontal pockets]. Final periodontal disease scores were calculated by taking the sum of the sextant scores and subtracting this figure from a maximum of 24. Therefore, in this study, a high CPITN score represents healthy gingivae and a low score indicates disease.14 Also, we divided participants into two groups, according to CPITN scores. A case definition for clinically significant periodontal disease was defined as CPITN ≤ 18, based on previous studies.14 For elimination of confounding bias, patients who had received any surgical or nonsurgical periodontal therapy in the past 6 months and had a history of use of antibiotics, antimicrobial mouth rinse, anti-inflammatory agents, and any chemotherapeutics in the past 3 months or patients with < 20 teeth were excluded from study.10

All participants were instructed to consume a total of two cups of green tea (2 gm of green tea in 150 mL of hot water for 3 minutes) per day, for a period of 3 weeks. Whole unstimulated saliva was collected, and TAC was measured and compared at baseline, and after 3 weeks of drinking green tea. The inclusion criteria, experimental protocol, saliva collection, and TAC assay were the same as our previously published study.12

Results were expressed as mean ± standard deviation. The differences between groups were assessed by ANOVA and sample t-tests. We assumed a p-value of <0.05 (95% confidence level) to specify a significant difference. The SPSS 21 software was used for statistical analyzing.

In the present study, 60 healthy males participated in three groups. The periodontal status of each group in terms of CPITN is shown in Graph 1. Table 1 compares the difference in CPITN score between each of the two groups using a robust test of one-way ANOVA (Welch test) and Tamhane's post hoc test (Table 1). It indicated the significant difference in periodontal index between NS and heavy CS and between light CS and heavy CS. Also, the Pearson correlation coefficient between periodontal status index (CPTIN) and salivary TAC was 0.29 (p = 0.21) in NS, 0.69 (p = 0.001) in light CS, and 0.64 (p = 0.003) in heavy CS groups respectively; that was significant in light and heavy CS. Table 2 indicates the alteration in salivary TAC from baseline to day 21, with a case definition for clinically significant periodontal disease considered as a CPITN ≤ 18 (Table 2). There was a significant interaction effect between time of TAC evaluation and patients' periodontal state (p = 0.009). It means that the average change in TAC was not the same between healthy subjects and those with periodontal disease. Comparing TAC levels between healthy subjects and those with periodontal disease at baseline and day 21 separately showed significant differences between the two groups of patients using Bonferroni post hoc test (p < 0.0001, p < 0.0001). 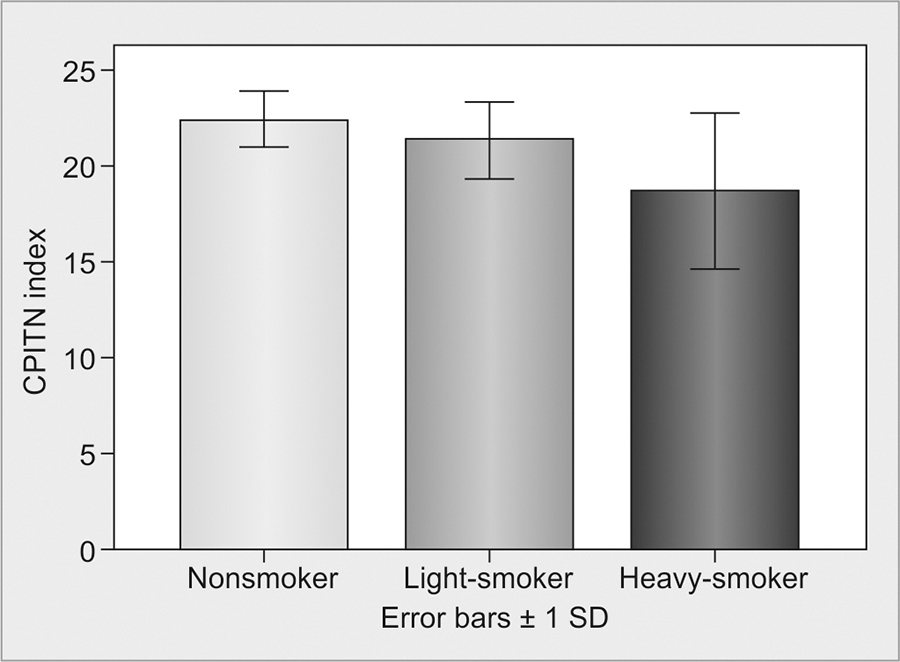 Differences in CPITN between groups

The current study indicated the difference in CPITN index and salivary TAC in NS vs light and heavy CS after green tea consumption. The whole unstimulated saliva was used for measuring TAC. Stimulating salivary flow might have increased saliva volume, but would have disrupted the antioxidant concentration. Also, the mastication process that might be used for salivary stimulation may cause the expulsion of relatively high quantities of GCF from the periodontal pockets, artificially increasing the antioxidant capacity in saliva with plasma-derived antioxidants.14

The results of present study showed that heavy CS had worse periodontal status as indicated by lower CPITN scores. There is an abundance of literature supporting the relationship between smoking and periodontal diseases.14,15 The induction of oxidative stress by nicotine and the depletion of antioxidants subsequently might be one of the mechanisms for the tissue damage.14 The finding of this study demonstrated that subjects with the worse periodontal health status tended to have greater oxidative damage, as shown by the presence of lower salivary TAC in whole saliva.14 Agnihotri et al3 reported a progressive reduction in salivary superoxide dismutase (SOD) levels from healthy NS to light CS to heavy CS in subjects with chronic periodontitis. They argued that reduced smoking might improve antioxidant levels. Tonguç et al6 argued the impact of smoking status on antioxidant enzyme activity in subjects with chronic periodontitis and concluded that both periodontitis and smoking lead to significant changes in antioxidant enzyme activity in blood and gingival tissues. The combination of smoking and periodontitis resulted in significant alterations in SOD activities in periodontium.

The main finding of this study demonstrated that subjects with a lower CPITN index and worse periodontal health had a higher change in salivary TAC levels after a 3-week green tea consumption. Kushiyama et al11 analyzed periodontal status of 940 Japanese men, and evaluated the association between the consumption of green tea, which was determined by a self-reported questionnaire for the number of cups per day, and periodontal parameters. The multivariate linear regression models showed every one cup per day increment in green tea intake was significantly associated with a decrease in the mean probing depth, clinical attachment loss, and a decrease in BOP. They concluded the almost inverse relationship between the green tea drinking and periodontal disease.

To evaluate the role of green tea consumption as an adjunct to periodontal therapy for the management of mild-to-moderate chronic periodontitis and effect on the TAC on GCF and plasma, Chopra et al16 ran a clinical trial on 120 subjects and demonstrated a significant improvement in all clinical parameters along with an 8-fold greater antioxidant capacity in GCF in the green tea-intake group than nonconsumers.

In the present study, considering the taste as well as the color of green tea, it was practically impossible to have a placebo group. Also, we could not recruit female smokers because of low prevalence and cultural issues in Islamic Republic of Iran. Smoking status was recorded based on self-reporting by participants and there was a lack of chemical validation of the smoking status; however, most of the previous studies used self-reporting status. In this study, we measured periodontal status only at baseline. Considering the length of study and the fact that participants did not get any mechanical periodontal therapy in the study period, it seems that measuring CPITN again at the end of study would not be a good evaluation.

With the limitation of the study, we can conclude that green tea intake increases the TAC of whole saliva in adults with significant periodontal problems due to smoking, and might be useful as a preventive or adjunct periodontal treatment in this group of people.

Based on results, considering the safety and availability of green tea, it can be used as a preventive or supplementary treatment in periodontal problems, especially in smokers, after further investigation.