The successful outcome of endodontic therapy strongly demands the complete elimination of microorganisms from the root canal system. Primary root canal infection is due to microorganisms colonizing in the pulp tissue.1 There is an abundant number of bacterial species that have been observed as inhabitants of the oral microflora, because of high nutrient availability, low oxygen potentials, and bacterial interactions in root canals, but the number of bacterial species present in endodontic infections is limited.2 Primary endodontic infections are polymicrobial in nature and dominated by Gram-negative anaerobic rods.3 Enterococcus faecalis is one of the most resistant microorganisms that dominate the microbial ecosystem of endodontic failure cases.4

Neem or A. indica has shown to be effective against various microorganisms found in the oral microflora, such as E. faecalis and Candida albicans.5 Its excellent antibacterial properties make it a material of choice for root canal irrigation and also an alternative to harmful chemical irrigants, such as NaOCl.

Green tea polyphenols (GTPs) are obtained from C. sinensis.6 Catechins and the flavins are present in GTPs, and they are considered as microbiologically active ingredients.7

Triphala consists of Terminalia chebula, Terminalia bellerica, and Emblica officinalis, the three medicinal plants that are dried and powdered to get an Indian Ayurvedic herbal formulation.8 It has a potential of antibacterial activity against enteric pathogens,9 and also has anti-inflammatory activity.

The aim of the study was to evaluate and compare extracts of neem, triphala, and green tea with chlorhexidine as a root canal irrigant.

Freshly prepared extracts of green tea (K Patel Pvt Ltd, India) and triphala (Himalaya, India) were mixed with 2 mL of 10% dimethyl sulfoxide (DMSO) (MERCK Specialty Pvt Ltd) liquid. To improve the efficiency of herbal products, DMSO is added. About 10% DMSO did not interfere with antibacterial properties was confirmed with the disk diffusion method. This was stirred for 2 minutes and then passed through fast filter paper. The strained liquid was collected and used samples were prepared (Fig. 1). 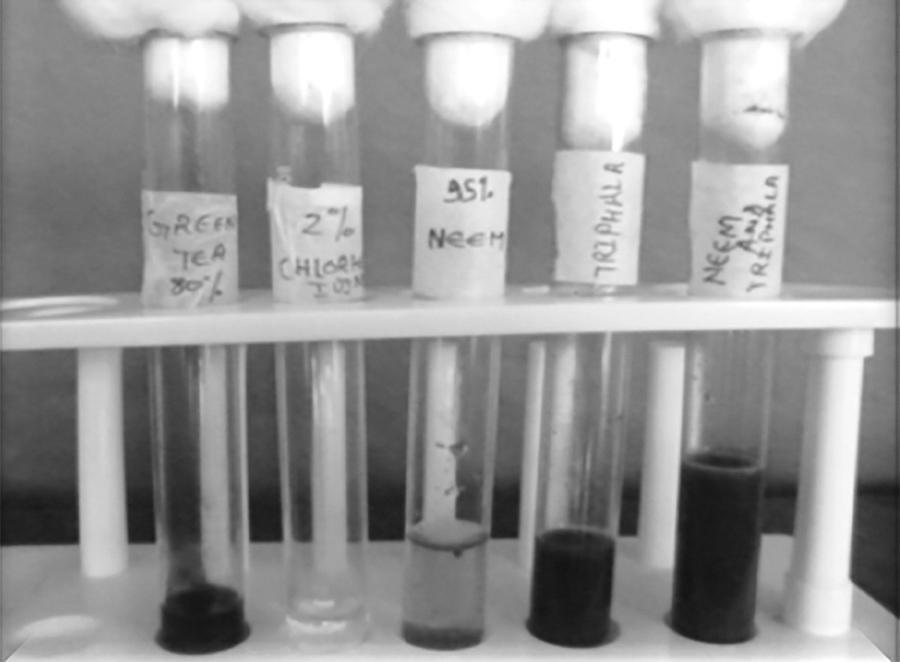 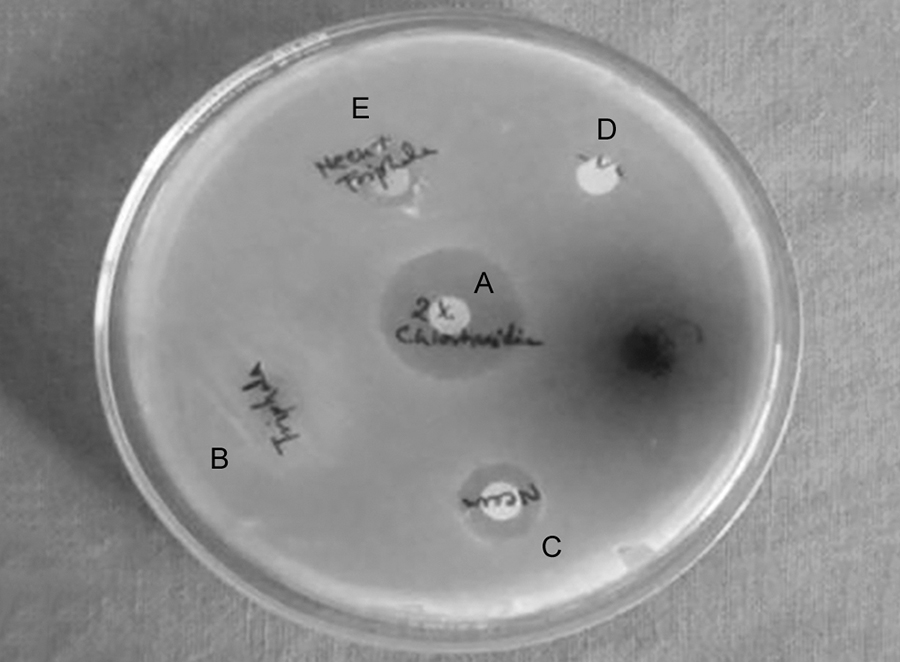 Fresh neem leaves were utilized for the study. Neem leaves were thoroughly cleaned in distilled water and afterward weighed and recorded. Around 25 gm of fresh neem leaves was blended with 50 mL of absolute alcohol and the blend was macerated for 1 to 2 minutes and the partition of the course residue was done utilizing muslin cloth filtration. Same separation procedure was rehashed for the coarse residue utilizing alcohol. Both these extracted parts were later pooled together and afterward again separated utilizing fast filter paper. Up to volume of 25 mL was taken after separation of the alcohol from the extract and afterward the rest of the extract was stored in amber-colored airtight bottle.

The bacterial stock culture E. faecalis was obtained and culture was grown overnight in brain heart infusion broth and inoculated in Mueller—Hinton agar plates. Inoculation was performed by utilizing sterile swab brushed over the media. One round well, 4 mm deep and 8 mm diameter was punched in every agar plate utilizing sterile plug-borer and the prepared irrigants were added to the wells. Agar plates were incubated at 370°C for 24 hours in an incubator. The diameter of bacterial inhibition zones around each well was recorded to the closest size in millimeter.

Comparison of the zones of inhibition of the root canal irrigants against E. faecalis 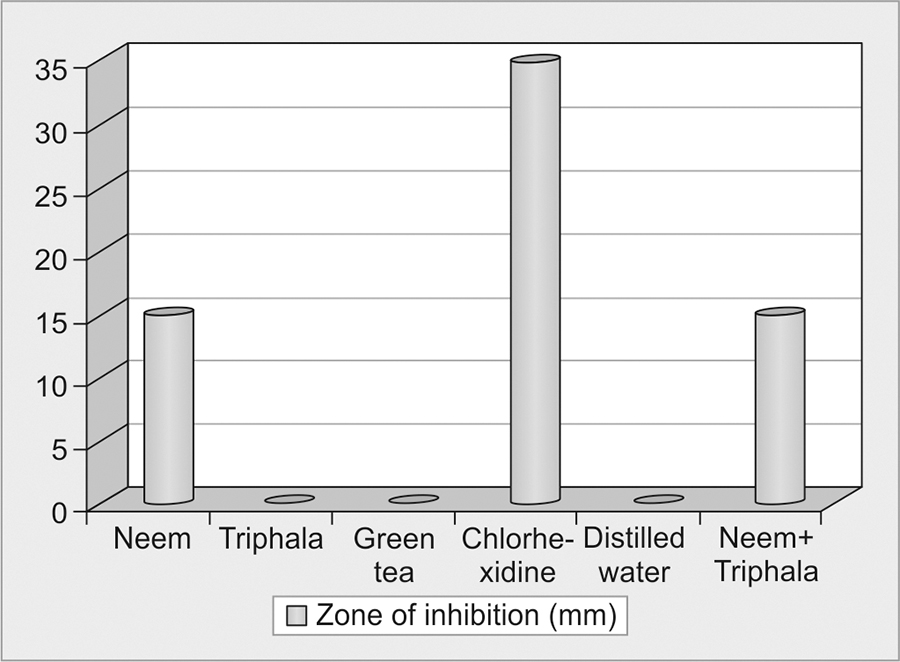 Eradication of bacteria from the root canal system is important in ensuring the long-term success of root canal therapy.10 The microorganisms are the primary etiological agent in endodontic infections, and inability to destroy them influences the result of endodontic therapy. Studies have demonstrated that the bacterial flora in endodontic diseases is polymicrobial, with a predominance of anaerobic species.11,12 This is fundamentally accomplished through the reduction of microorganisms by debridement of the root canal system using mechanical preparation of the canals combined with chemical interventions. A few zones of the root canal walls, particularly in the apical third, are hard to clean mechanically.

Enterococcus faecalis is part of the human normal flora and an essential pathogen in opportunistic infections in humans. Enterococcus faecalis is rarely present in primary apical periodontitis, but it is the prevailing microorganism in root canal treated teeth presenting with posttreatment apical periodontitis.8 Eradication of E. faecalis from the root canal remains a challenge, as it is impervious to a variety of antimicrobial agents. Studies have also shown that E. faecalis may be one of the reasons of failure of endodontic treatments.13 The control and suppression of E. faecalis in these dental procedures are of primarily importance in decreasing the penetration of bacteria inside the dentinal tubules and furthermore restricting the development of any relationship with different microorganisms, as in virulence factors, environment, and the biofilms.

Use of neem as an endodontic irrigant might be advantageous because it is a biocompatible antioxidant, and thus not likely to cause the severe injuries to patients that might occur via NaOCl accidents. Bitter taste associated with this plant can be altered by different formulations due to addition of sweeteners and flavors to increase the patient compliance and acceptability.14

The results obtained in this in vitro study showed that neem leaf extract is a viable medicament against E. faecalis. Although 2% chlorhexidine showed comparatively more antimicrobial effect than neem, it still had an observable effectiveness against test organisms.

Neem leaf extract has a significant antimicrobial effect against E. faecalis. Preclinical and clinical trials are needed to evaluate biocompatibility before neem can conclusively be recommended as an irrigating solution, but in vitro observation of neem effectiveness appears promising.