Light-curing composite resins are one of the most widely used restorative dental materials. The placement of composite restorations is technique-sensitive and requires adequate light curing to ensure a thorough cure.1-3 Function and longevity of the restoration will be compromised if the composite is not sufficiently cured.4 Therefore, when restoring cavities with light-activated resin composites, it is recommended to cure the resin composite in increments no thicker than 2 mm to ensure an adequate cure.1-3 In order to overcome the 2 mm incremental composite placement limitation and thus decrease chair time, several manufacturers have introduced “bulk-fill” composites. These composites claim to cure adequately up to 4 mm deep, and hence, restorations can be filled in one increment (“bulk”) when the cavity depth is less than 4 mm.5-7 Research studies have shown mixed results: Some studies confirmed the manufacturers' claims while other studies found inadequate curing when cured in 4-mm bulk.8-15 Since adequate polymerization of the composite is critical to the success of the restoration, evaluation of the depth-of-cure of composites remains a vital topic in dental research.

The inconsistency in the literature regarding the depth-of-cure of bulk-filled composites can be a result of specific products or can be caused by methodology used for the measurements. Low-viscosity bulk-fill composites cure deeper than high-viscosity materials.3,15-17 The same composites showed different depth-of-cure when measured with different methods. A scraping test [International Organization for Standardization (ISO) 4049]18 overestimated the depth-of-cure compared with hardness tests, because partially cured material is usually rigid enough to be considered “cured”.3,8,12,19 A note in the 1992 ISO publication alludes to this observation by suggesting that the obtained depth-of-cure is about twice the optimal conversion of monomer or polymer.18 Hardness values represent load-bearing ability and have been correlated with the degree of conversion for resin materials.20,21 Hardness can be determined as the top/bottom hardness ratio at prescribed depths3,10-12,14,15,19 or as hardness profiles through the depth.3,8,10,13,15,17,22 Both hardness methods reflect the relative extent of conversion of the deeper part of a restoration in relation to the top surface.

Substrate opacity and sample preparation techniques can also affect the depth-of-cure results. Composite samples can be made in a mold with a covered slot, which provides a unidirectional cure and a surface suitable for measuring hardness profiles.3,8,10,15,22-24 A wide range of mold substrates have been used in the aforementioned studies, including plaster, acrylic, Teflon, and stainless steel. The opacity of these substrates usually does not resemble tooth structures. Tooth enamel allows light to transmit to a degree that it can improve curing.25,26 On the contrary, in dentin, light attenuation can decrease depth-of-cure.27 To account for these clinical conditions, depth-of-cure is sometimes determined in restored teeth by cross-sectioning them.13,26 However, such cross-sectioned restorations must be embedded and polished to obtain surfaces that are smooth enough for accurate hardness measurements; those procedures could affect the surface hardness values.

The depth-of-cure of three bulk-fill composites and one conventional composite was determined at 24 hours using Vickers hardness profiles (n = 7). Material information is listed in Table 1.

Plaster molds were made from dental stone (Whip Mix Microstone Model Stone Golden ISO type III, Whip Mix, Louisville, KY, USA) with rectangular slots (2 mm wide, 2 mm deep, 6 mm long). Composite was pressed into the slots and placed against an orange glass plate secured with a clamp (Figs 1A and B). The orange glass plate (Bullseye Glass Company, Portland, OR, USA) blocked blue light from reaching the slot surface, and thus ensured unidirectional light-curing. The end of the slot that was exposed to the curing-light was covered with a thin glass cover slip (0.15 mm) to create a smooth surface for the hardness measurement at the light-exposed surface (“0 mm”). The composite was light cured for 20 seconds while holding the light guide of a quartz-tungsten halogen unit (XL 3000, 3M ESPE, St. Paul, MN, USA) against the thin glass cover slip. The curing-light had an output of 450 mW/cm2 measured with a curing radiometer (Model 100, Demetron Research Corp, Danbury, CT, USA). After light-curing, the glass covers were taken off and any uncured composite at the far end of the slot was removed. The samples were stored in a dark container for 24 hours. Microhardness was measured using a hardness tester (QV-1000 Micro Hardness Tester, Qualitest USA LC, Fort Lauderdale, FL, USA) with a Vickers indenter at 50 gm load for 15 seconds dwell-time. Indentations were made at the 0 mm end and at 0.5 mm increments along the length of the composite in the slot (Fig. 1C).

(A) Composite filled slot was covered with an orange glass plate held in place with a clamp. Exposing only one end of the slot to the curing light ensured unidirectional light-curing of the composite; (B) Composite cured in slot made in tooth and covered with orange glass plate; (C) Positions of hardness indentations on composite sample cured in the plaster slot; and (D) Positions of hardness indentations of composite sample cured in the tooth slot 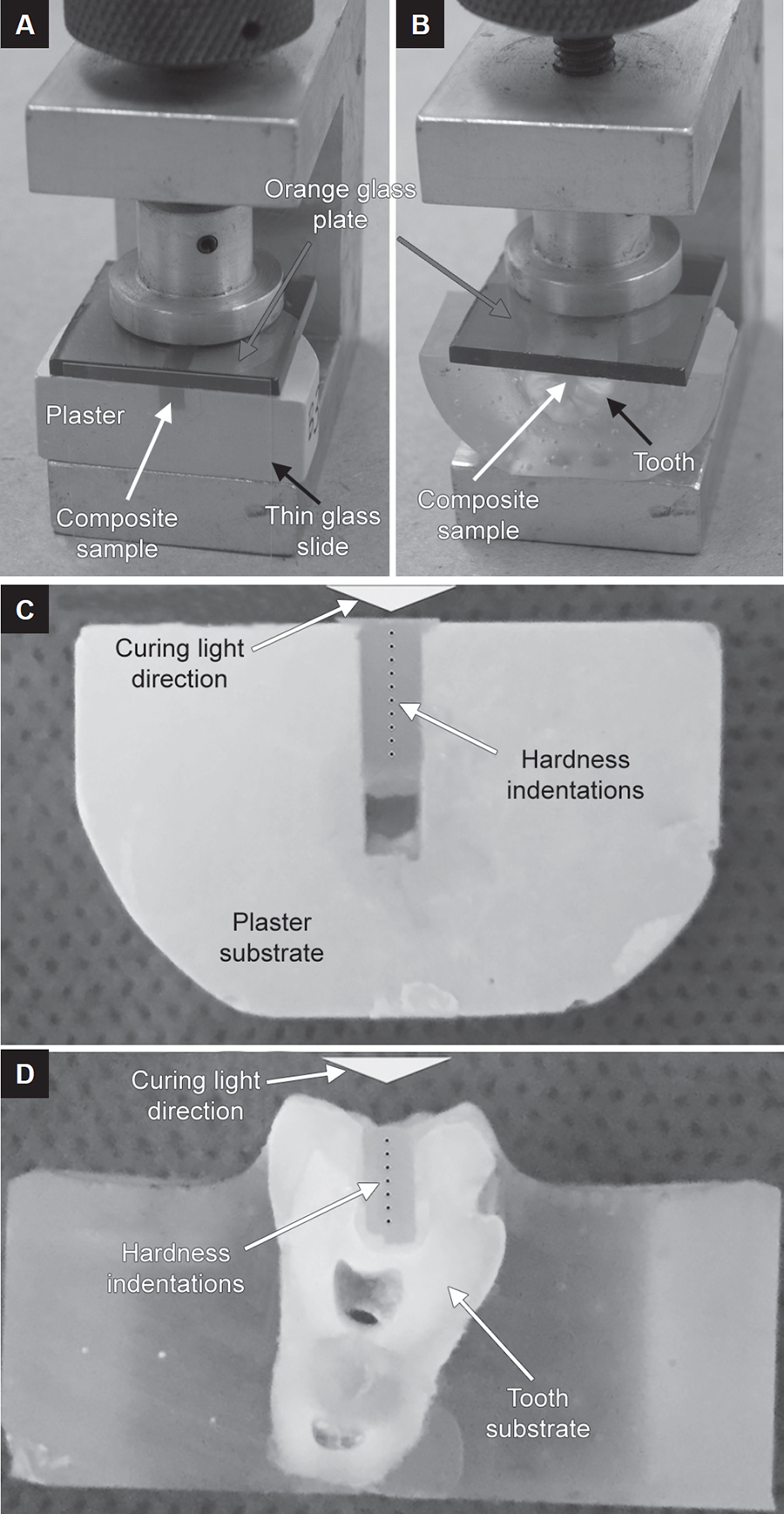 Extracted teeth (Institutional Review Board approval 13-02486-XM) were embedded in clear acrylic resin (SamplKwick Acrylic, Buehler, Lake Bluff, Illinois, USA) and sectioned buccolingually into two halves. The sectioned teeth were prepared with rectangular slots (2 mm wide, 2 mm deep, 4 mm long), to simulate a deep cavity (Fig. 1D). Composite was pressed into the slot and placed against the orange glass plate similar to the plaster method (Fig. 1B). The top (occlusal) surface was not covered with glass slip because that would require sectioning of the cusps. Hence, hardness measurements at the light-exposed surface (“0 mm”) were not obtainable in the tooth covered-slot method. The composite was light cured from the occlusal direction with the light-guide pressed against the cusps, approximately 2 mm above the composite surface, using the aforementioned curing-light unit for 20 seconds. After light-curing, the orange glass cover was taken off and any uncured composite at the far end of the slot was removed. The samples were stored in a dark container for 24 hours. Vickers hardness was measured using the same parameters as the plaster covered-slot method. Indentations were made down the length of the slot along the long axis of the tooth at the center of the composite restoration (Fig. 1D) at 0.5 mm increments.

Results were analyzed using two-way ANOVA and pairwise comparisons (α = 0.05) to determine if there were statistically significant differences in Vickers hardness between the two covered-slot methods and among the depths within the same composite.

This study investigated if depth-of-cure evaluations could be affected by the substrate that surrounds the composite tested. Depth-of-cure of composites determined with Vickers hardness was compared between samples that were light-activated in a slot-shaped preparation in plaster mold or tooth. We found that the bulk-fill composites we tested achieved higher hardness values when light-cured in the tooth substrate than when light-cured in the plaster, even though the light tip was about 2 mm further from the composite surface. Therefore, the null hypothesis that the substrate would make no difference was rejected. The optical properties of the semi-translucent tooth substrate apparently delivered more light at greater depth to the composite than the opaque plaster mold. No difference between substrates was found for the conventional composite, which had the steepest decline in hardness (Graph 1D), illustrating why it should be cured incrementally to achieve an acceptable cure. The relatively shallower curing depth may explain the lack of substrate effect. Greater light delivery through the tooth substrates is most effective at greater depths (Graphs 1B and C). Moreover, in order to reach the area where the measurements were taken (middle of the sample surface, against the orange glass), light must be transmitted through the surrounding composite. Conventional composites are less translucent than bulk-fill composites,28 thus the extra light may not have been sufficient to make a significant difference in the measurement area. Note that depth-of-cure may still have been improved by the tooth substrates at the composite—tooth interface.25 Differences between the tooth and plaster substrates were more prominent in the nonflowable (packable) Tetric Evoceram Bulk Fill Flowable than in the flowable Venus Bulk Fill or Filtek Bulk Fill (Graph 1). In addition, the steeper hardness decline of Tetric Evoceram Bulk Fill compared with the other bulk-fill composites suggested that it was more difficult to cure at greater depths, which is consistent with findings in other studies.8,15,16

Graphs 1A to D 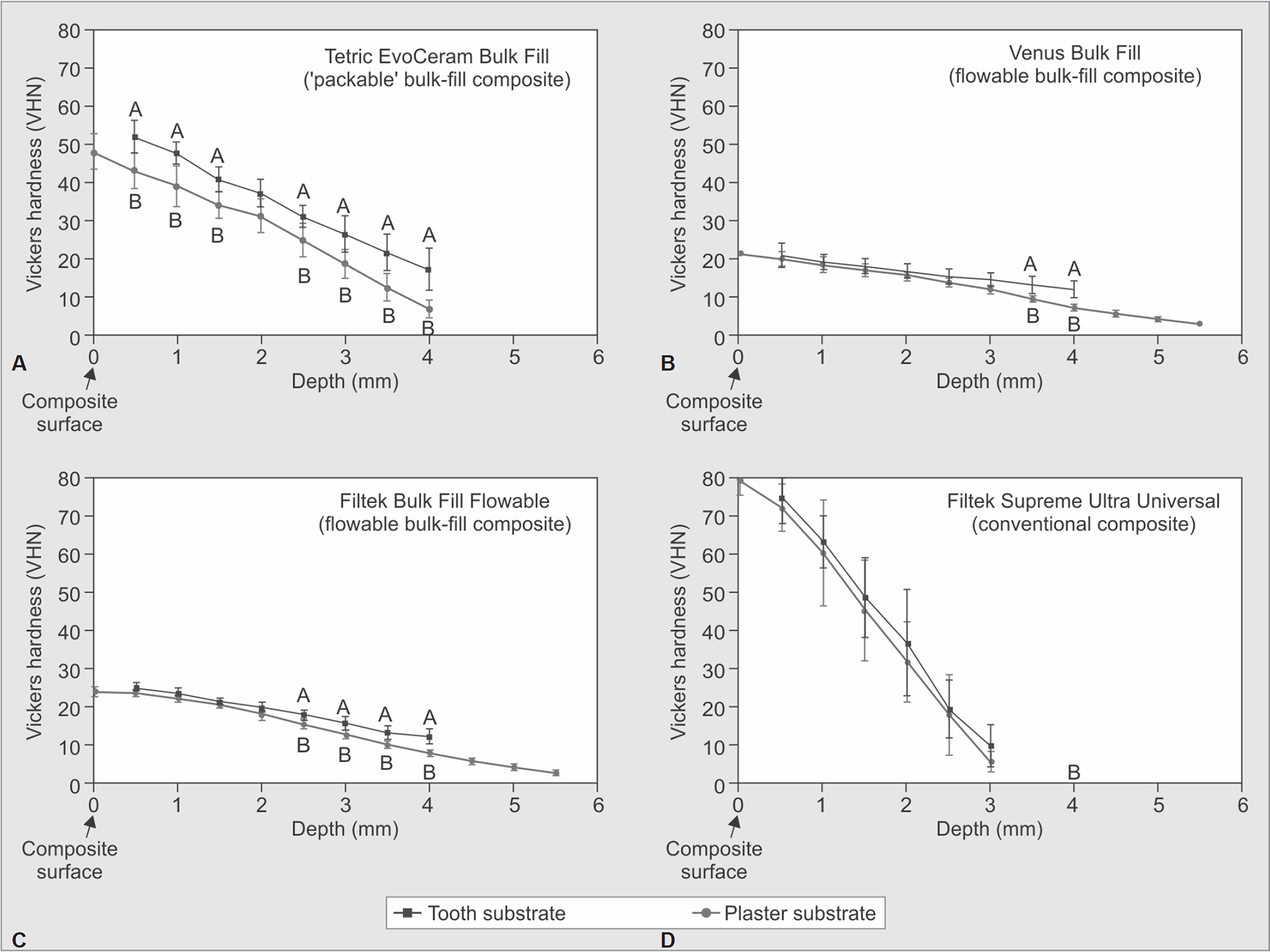 Depth-of-cure could also be characterized by the last point that the hardness could be measured before the composite becomes too soft for the indentation test. Venus Bulk Fill and Filtek Bulk Fill Flowable had measurable hardness up to 5.5 mm; Tetric Bulk Fill was measurable up to 4 mm; and Supreme was measurable up to 3 mm. The depth of the last measurable point may appear similar to the depth-of-cure determined in ISO 4049, in which uncured composite is scraped away and the depth of remaining composite is considered cured.18 However, hardness values at the last measurable points were <15% of the values at the top surface. Clinically, such low hardness is not likely to be considered sufficiently cured. Therefore, it can be argued that depth-of-cure values determined by the ISO 4049 standard may not be clinically relevant. Other studies have also suggested that this ISO standard overestimates cured conditions,3 have divided the value by 2,8 or found that dividing by 2 was still an overestimation.19

Another depth-of-cure method measures the top and bottom hardness of a sample. Bottom/top hardness ratio of 0.8 (or 80% of maximum hardness) has been widely used to indicate sufficient curing of composites. Flowable bulk-fill composites, in particular Venus Bulk Fill, had depth-of-cure of 4 mm or more using the 80% bottom/top hardness ratio.8,10-12,15 However, we found that hardness in Venus Bulk Fill composite started to drop below 80% hardness at 1.5 mm depth in the plaster mold and at 2.0 mm depth when cured in the tooth slot. In other words, depth-of-cure for the bulk-fill composites in this study did not support the 4 mm curing depth but suggested sufficient curing up to 2 mm. Depth-of-cure based on the transition from glassy to rubbery state or elastic modulus has been shown to be about half of the depth-of-cure from the 80% bottom/top hardness method.19 This number appears to confirm our results. Studies that found 4 mm depth-of-cure used metal molds, such as stainless steel or brass.8,10-12 Metal substrates may be reflective unlike the plaster mold/orange glass used in the present study. Whereas reflective molds appear to overestimate and plaster molds may underestimate depth-of-cure, using tooth substrate in a covered-slot method should best represent the clinical conditions.

Depth-of-cure of composites has also been determined in restored teeth.13,26 Since the composite surface has to be flat and smooth for accurate measurement of microhardness, the restored teeth had to be cross-sectioned, embedded, and polished. Each of these procedures could increase composite hardness values. In the present study, the composite in the slot was cured against an orange glass plate (to block the blue curing light) to achieve a surface quality that was suitable for hardness measurement without the need of additional surface treatments and without allowing light activation from other directions than the illuminated external tooth and restoration surface. Therefore, the depth-of-cure measured with the tooth covered-slot method that we introduced in this study may most closely resemble the curing under clinical conditions. Using the tooth covered-slot technique, we showed that bulk-fill composites cured deeper than a conventional composite. Among the bulk-fill composites, the two flowable bulk-fills cured deeper than the “packable” bulk-fill.