The increasing demand for esthetic restoration has led to a drastic increase in clinical applications of and intensive research on adhesives. The fundamental requirement of resin composite is durable adhesion of the composite to tooth structure. In order to generate a durable seal between the restoration and tooth surface, successful adhesion without contamination is necessary.1-4 Contamination with saliva and blood commonly occurs during the procedure; rubber dam isolation is the ideal way to achieve a dry field; however, in clinical routine, it is not always feasible.

There are several studies that indicate that blood contamination significantly reduces the bond strength. According to Kaneshima et al,5 the effect greatly varies on the surface condition of adherent.

Self-etch adhesives have gained popularity among the clinicians since they are less technique-sensitive, provide ease of application, and reduce clinical steps. Although the short application reduces the risk of contamination, however, it may be sometimes impossible to maintain a contamination-free area, especially when restoring class II and class V. There are limited studies investigating the effect of blood contamination on the microtensile bond strength of self-etch adhesives.

The purpose of the study was to evaluate the effect of blood contamination and various decontamination procedures on the microtensile bond strength of self-etch adhesives at different stages before and after curing.

Schematic presentation of groups in the study 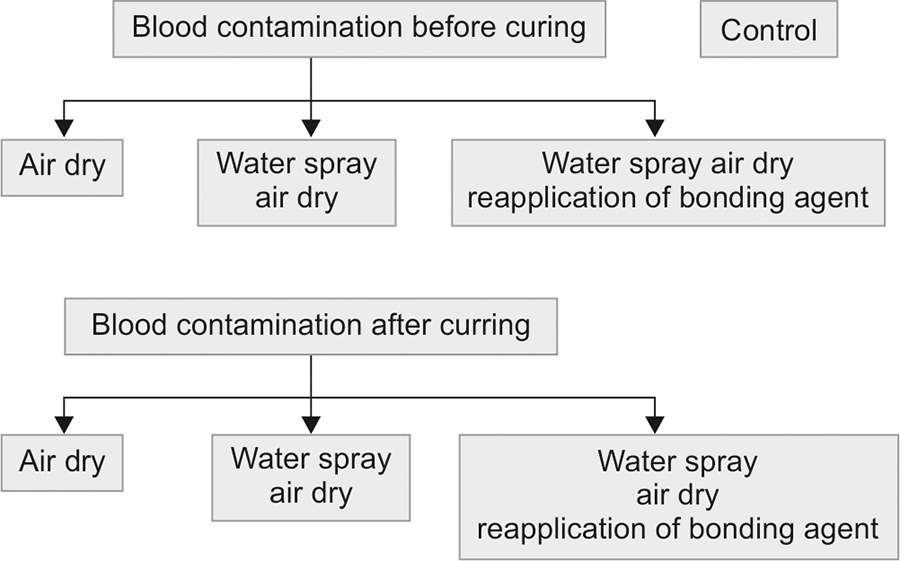 The blood sample was obtained from one of the authors. Fresh venous blood was collected from the vena mediana using a disposable syringe. The withdrawn blood was used immediately. The samples were randomly divided into 9 groups based upon following factors: The step in the bonding sequence when contamination occurred (before or after curing) and the decontamination procedures (air dry, water spray, and reapplication) as shown in Flow Chart 1.

Self-etch adhesive (single-bond universal 3M) was applied on the dentin surface according to manufacturer's instruction using a microbrush and light cured for 10 seconds.

Group I: Self-etch adhesive was applied on the dentin surface, which was followed by contamination using a drop of blood applied directly on the surface, left undisturbed for 15 seconds, and light cured for 10 seconds.

Group IV: After contamination, the decontamination procedure using water spray followed by air dry was carried out, and the adhesive was reapplied and light cured for 10 seconds.

A nanohybrid composite resin (Filtex Z-250, color A3—3M ESPE, USA) was placed in increments into Teflon cylinders (3 × 8 mm). Each increment was light cured for 40 seconds. All the specimens were stored in distilled water for 24 hours followed by thermocycling (5—55°C 15 seconds dwell time). After storage, the specimens were debonded under tension using a universal testing machine (Model No. STS 435) at a cross-head speed of 3 mm/minute. The bond strengths were expressed in MPa. 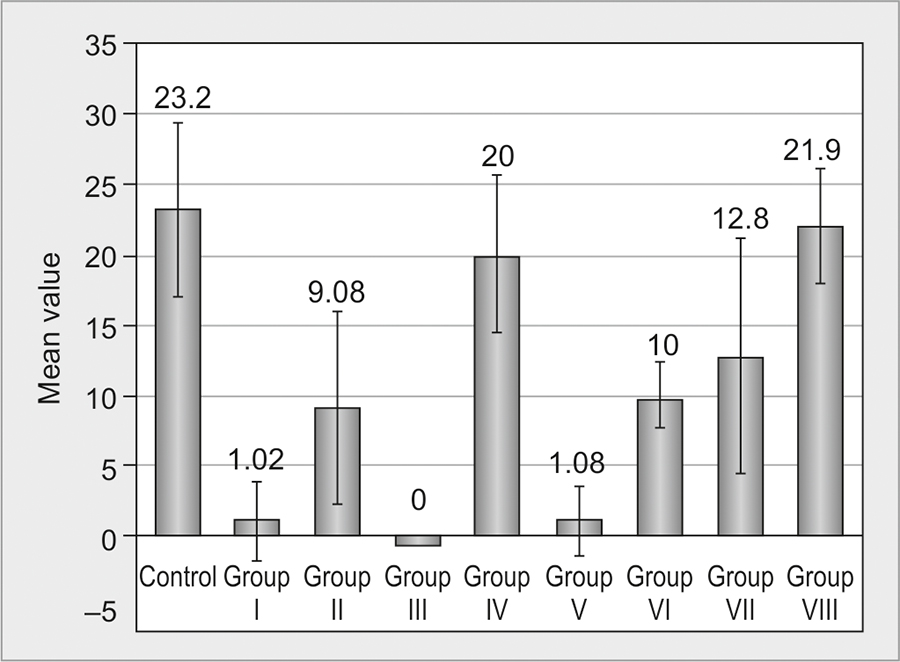 Contamination of the operating field is a problem, which occurs while restoring deep proximal and cervical lesions. Rubber dam isolation is mandatory to achieve a dry field; however, in many clinical situations, the placement is difficult and contamination may occur. In this study, the effect of blood contamination on microtensile bond of self-etch adhesive was evaluated. Contamination of blood was carried out before and after curing along with different decontamination procedures that are commonly used clinically.

Adhesive used in the study

The adhesive strategy of self-etch adhesive relies on smear layer dissolution. Hence, for laboratory testing of self-etch adhesives, it is recommended to form a smear layer that closely resembles that of which is formed clinically. Oliveira et al6 demonstrated that 320 grit silicon carbide paper creates a clinically relevant smear layer. The carbide and diamond burs and disk, which are most frequently used to obtain a dentin specimen, create a smear layer, i.e., not clinically relevant.7,8 Hence, in this study, the enamel was removed with a diamond disc followed by wet sanding on the dentin surface with 320 grit silicon carbide paper in order to obtain a standardized smear layer.

There are various studies showing that blood contamination affects the bond strength. However, the literature contains many discrepancies, particularly, in the terms of type of blood used and the storage period. There are two opinions with regards to type of blood to be used; one recommends fresh blood,9 while the others recommend blood with anticoagulant.5,10 The influence of blood contamination on bond strength is attributed to its high protein content that, along with macromolecules, such as fibrinogen and platelets that form a film on the dentin surface, obstructs the penetration of the adhesive system into dentinal tubules.5 Adding an anticoagulant to blood will not allow the formation of a blood film, ultimately giving confounding results. Hence, fresh blood that was immediately drawn was used in this study in order to simulate the clinical condition.

Self-etch adhesives have gained popularity due to reduced clinical steps that probably will reduce the risk of contamination. In this study, single-bond universal adhesive (3M) was used, which is a seventh-generation bonding agent, which is both hydrophilic and hydrophobic in nature thus, providing good strength at both wet- and dry-etched dentin. It provides a distinct hybrid layer and resin tags, which improve bond strength. Hence, single-bond universal adhesive was selected in this study to evaluate whether contamination with blood affects the bond strength.

Within the limitations of this in vitro study, it can be concluded that blood contamination should be avoided when using self-etch adhesives.